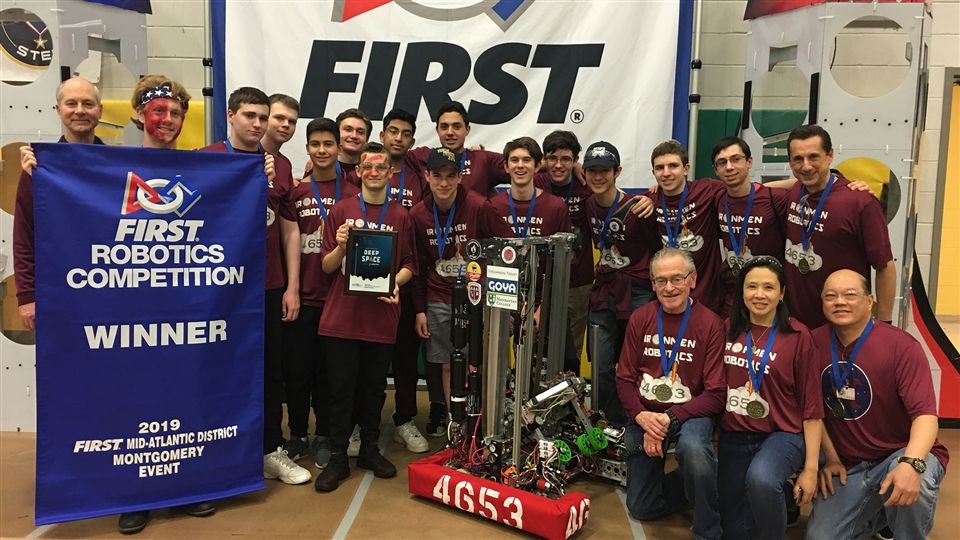 3/31/2019
A win for the Ironmen Varsity Robotics team at the FIRST Robotics Competition (FRC)!
Congratulations to Ironmen Varsity Robotics team for being a member of the winning alliance at the FIRST Robotics Competition (FRC) Event held at Montgomery High School in Skillman, New Jersey, and earning a winner banner and trophy.  (FRC teams always compete in groups of three called alliances).  The Ironmen started off the competition slowly, finishing in 17th place out of 37 teams in the preliminary rounds.  But during those rounds they showed excellence in capturing and scoring game pieces, which was precisely the capability that the top two teams were looking for to balance out the top-seeded alliance with two offensive robots and one defensive robot. This alliance was a juggernaut, and won each of its three elimination rounds by a score of 2-0.  The Ironmen improved upon their performance from last year, when they were a member of the finalist (second place) alliance.  The win qualifies the Ironmen for the FIRST Mid Atlantic District Championship at Lehigh University on April 3 to 5. FRC is the large robot division of FIRST where robots can weigh up to 125 pounds and are built by team members after school.  Don Bosco Prep also sponsors FIRST Tech Challenge team for students in the senior robotics class where robots can weigh up to 45 pounds, as well as FIRST LEGO League teams in conjunction with local middle schools to get younger students interested in robotics and engineering.