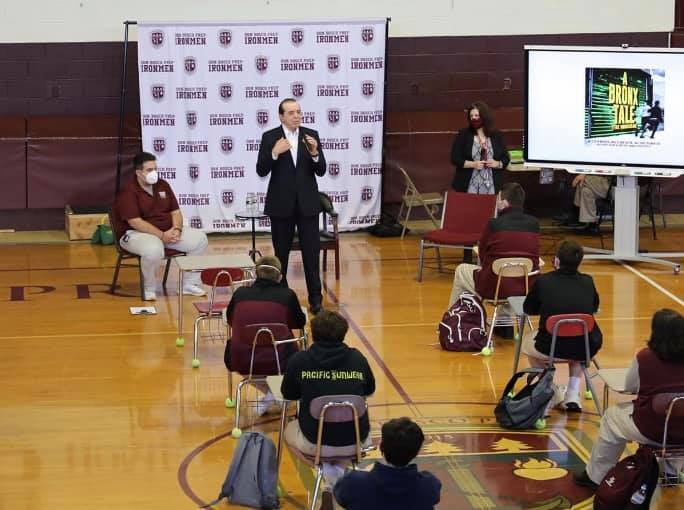 4/26/2021
Don Bosco Prep had the great fortune to welcome film, television and Broadway
actor, producer, screenwriter and playwright Chazz Palminteri this past Tuesday, April 20, 2021.
Mr. Palminteri addressed the Don Bosco Prep Communication, Performing, and Fine Arts
students about how to be successful in life and how to achieve one’s dreams and goals.

During an incredible motivational speech, Mr. Palminteri stressed to the boys the importance of
hard work, doing your best and using your talents. He also fielded questions from the Don
Bosco Prep students about the different aspects of the entertainment industry. “The two most
important things in life that you need to do to succeed,” Mr. Palminteri said. “Be good at what
you do, and be well liked.”

Mr. Palminteri has been in countless television shows, movies and Broadway. He is most
notably the creator and star of A Bronx Tale, which he developed from a one-man show into a
film version, and later as a Broadway musical. He has also starred in the film, “The Usual
Suspects”, and a host of film, broadway, and television productions.

As part of the experience, Fine Arts students sketched Mr. Palminteri as he spoke about how to be successful.

“You have to have determination in life,” Mr. Palminteri told the students. “Don’t let anybody tell
you you can’t do something because you can. The choices you make will shape you forever.
Believe in yourself. Be the best you can be.”
Back