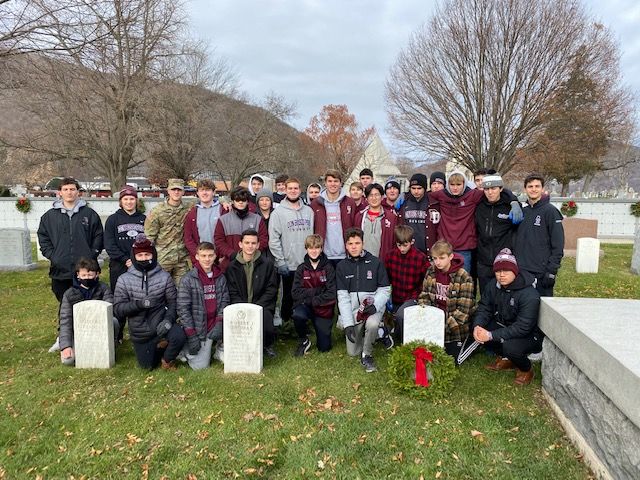 12/6/2021
Don Bosco Prep's Veteran's Affairs Club visited West Point on Saturday, December 4th to participate in "National Wreaths Across America Day". This special observation is dedicated to remembering the sacrifices veterans have made in wars since the American Revolution. Thirty-three Ironmen along with the VA Club mentor Mrs. Mary Gettler, other faculty members, and alumnus Jonah Nadius, former VA club officer, spent the day covering graves of soldiers who gave their lives in service of our country. Students were greeted by Lt. Col. Thomas Oakley (father of T.J. Oakley '23) who gave them a tour and escorted them around the base.

Ironmen were later approached by Retired Lt. Col. Nawoichyk (father of Grant Nawoichyk '19) who led them to the grave of Major Thomas (TK) Kennedy (who attended DBP) to meet with some of his family. Students learned of Major Kennedy's love for honor and duty as it was also related to the honor code at Don Bosco Prep. The boys learned that he was killed in action and prayed together at the gravesite.

To see more photos from the day, please go to our Don Bosco Prep Official Facebook page.
Back